As you know by now there are 32 teams in 8 groups, or 4 teams in each group, and 8 x 4 = 32 if you know your maths.  The teams go through the Group stage where in each Group, each Team from one country plays against all the others in that Group which they have been allocated to.  See this link  here for information on how the draw for the groups works.

The 8 Groups are labelled with letters from A to H, and this year are:

The team representing Australia, the country I live in, is in Group C and plays each of the other 3 teams in Group C.   In other words Australia plays 3 other country teams in the group Australia is in, and all other 31 teams also play 3 other teams / matches in their Groups. 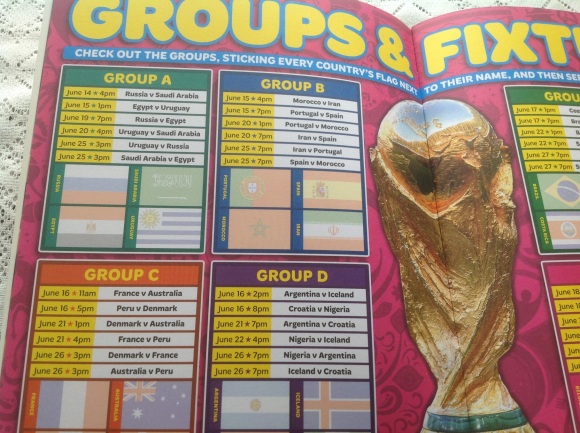 Now if you are a maths student looking at combinations and permutations, you could ask

“if there are 4 teams in 1 group and each team has to play or be matched against each of the other teams, how many matches would there be?”

Or put it this way:   how many unique pairs can be made from 4 items where order is not taken into account?

It doesn’t matter if you write “France versus Australia”  OR  “Australia versus France.”

This “problem” mathematically speaking is a Combination Formula (at its simplest), written as:

“What is the number of possible combinations of r items from a total of n items”.

In the FIFA World Cup example, we say “what is the number of possible combinations of 2 teams from a total of 4 teams?”

Alas, we now encounter the ! sign which is not just an exclamation of exasperation, but in mathematics, means FACTORIAL.    When you see the special ! Factorial symbol, it means to multiply from the starting number denoted by a letter ( in this case by either n or r) by numbers descending by one, all the way down to one.

Like I said, 6 Matches are played in each Group !!  The MATHS doesn’t lie, woohoo.

So what, some of you may be saying at this point.  Well, I love mathematics and statistics and information, and the Combination Formula can actually come quite in handy in some real-life situations.  What’s more, once you get into the maths of Permutations where the order of things matter, things can really heat up!

A permutation, also called an “arrangement number” or “order,” is a rearrangement of the elements of an ordered list into a one-to-one correspondence with itself. The number of permutations on a set of elements is given by n! (n factorial; according to Uspensky 1937, p. 18).

If you can understand the above, give yourself a gold medal.  A pictorial representation may make things easier to understand though.

You could say imaginatively that the above describes 3 kids going for a vaccination shot but none of them wants to go first (or even second or third, for that matter).  Their exasperated parent wonders how many arrangements of all 3 recalcitrant kids there are, and using nous and pencil and paper scribbles out the possibilities, which of course are 6 as shown in the 3rd line in the sketch above.   If I were the parent I would put each of the 6 permutations in a hat and randomly draw one of them, and the kids would have to go into the doctor’s room in that order.  So there.

P  PERMUTATIONS (where order does matter)

At the end of the Group Stage (consisting of 48 matches) comes the “Round of 16” (which I am really keen to watch) which as the name implies, consists of 16 teams.  The SBS TV Guide shows how these talented 16 teams are matched in Matches 49 to 56 i.e. 8 matches.

Now you may wonder “how does a team from a Group win their Group?” and please note that I think that there is no such thing as a dumb question.   In fact I think “good on a person for asking questions, as long as she learns from it”.   Sometimes society thinks some things are common-sense or well known, but there are things which are neither.  Take the movie “Nell” for example, starring the amazing Jodie Foster.   Nell was raised by non-humans and had no sense of the common world of human beings, and no knowledge of or interest in things like mobile phones.

I have rather cleverly drawn up a hypothetical Table with made up Team Names and Results in a Group Stage Group Results Table. The Table below is for one of the 8 Groups.  The kid’s MATCH diary for the FIFA World Cup includes this type of Table for each Group results.  See this post  HERE for information about the diary.  Of course, to fill in a Table like the one below, you need to know the scores / results for the individual matches played by each of the 4 teams in a Group.

Hypothetical “raw data” for the table above is shown below.

Points are allocated as follows.

In this example, Australia is the outright winner with the most Points, 6, but after Australia, going by Points alone, both the Bahamas and the Caribbean have an equal number of Points, being 4.

The Goal Difference (GD) is looked at when more than 1 team has equal points.

In our example, the Caribbean team had 2 Goals For (or they scored 2 goals overall) and had 6 Goals Against them (meaning overall the Teams they played against in their group scored a total of 6 goals).

You can read more about the FIFA World Cup scoring at my other blog  HERE if you like, as beyond Goal Differences (i.e. if 2 teams have the same GD) other measures are used to ascertain the top 2 teams in a Group..

I find the best hard copy Results sheet to fill in is actually the one in the Guide to the Panini Adrenalyn XL FIFA 2018 trading cards!  It is set out on one A4 page and allows one to fill in the Goals won for each of the 48 games of the 8 groups, then of course for each Match in the Round of 16 onward.  You can see the Results sheet, if you want, by scrolling to about half-way down the Post  here .

As its name implies, the Quarter-finals (QF) consists of 4 matches, the Semi-finals (SF) of 2 matches, and the Final is one Match, with the 2018 FIFA World Cup grand final winner coming out victorious.

The Winners of these latter 2 Semi-final matches, go into the Grand Final.  The Final is Match 64.  The Losers of Matches 61 and 62 go into the 3rd place play-off, which is Match 63.

So there you have it, unless I have got anything wrong (in which case, please let me know nicely).  Because I love data and the FIFA World Cup and scoring, I have typed out a Results Sheet for all the 48 initial matches of the Group Stage and for the full Group Stage Results and Round of 16 onward.   I am providing them as Word Documents in both DOCX format and DOC format below.

Neither the SBS TV Guide or the Official FIFA World Cup Tournament Programme include score / results sheets, or have a large pull-out Sheet for recording Results.  So I decided to produce my own.

UPDATE:   I have added a post to my other blog “Our Lovely World” explaining penalties, yellow & red cards, and how the teams get through to the Final.   Click  here  to go there.

I hope someone reading this truly appreciates this post, and shares it with others.

Leave a Comment - please be on topic and polite Cancel reply