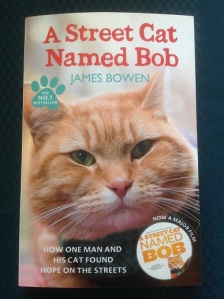 This book brings to my mind the creed about having a “seed of faith” – with the coming of Bob the cat, a seed of faith in Jame’s own humanity and in normalcy for both Bob and himself, was sown.

A Streetcat named Bob by James Bowen – reviewed by Celine

One of my favourite stories of all time, not just because it is true but because it is such a great story.  On the inside cover of the edition that I have, it simply states “James Bowen is a street musician in London.  He found Bob the cat in 2007 and the two have been inseparable since then.”

We could also say if we were reflecting on the spirituality of the story, that the gorgeous orange tabby cat FOUND James Bowen, the human.

With the help of a “ghost writer” Gary Jenkins, this story is very well written in simple language.  It is well structured and straight-forward and a delight to read.  Consisting of 21 chapters of 275 pages, it is hard to put down once you pick it up.  Every chapter is focused upon the finding (or eminent finding) of Bob, an angel from heaven in cat form, it would seem.

James’ personal story unravels from the starting point of a possible slide down-hill unless some changes happen to pick up the threads of Jame’s life ….. and it does big time … when James, aged in his twenties, comes across a stray cat, whom he cares for and who cares for him.

The story is told as a narrative with a few unhappy events being exposed in a moderate tempered or a calm mode, so that the truth is laid out.  There is no blame for any of Jame’s misfortunes but rather an expose of a series of unfortunate incidents, involving a sensitive boy who was left on his own too much, and found himself on the slippery slope of escape through taking drugs.

While the book does refer to Jame’s drug-taking, it shows that this was simply a bad choice that James made and that many do not take drugs just because they want more or a “buzz” which is what it seems on the surface, but as you dig through the layers, you can see that external circumstances including the easy availability of drugs, can push somebody over the edge into trying to escape their confusion or numbness or pain.

Not much further can be said about this first book in a series of three, apart from it is a must-read if you care about animals or about the relationship between humans and animals.  This story truly has a magical air about it because of an undoubtedly special unique relationship between one cat and one man.  It ends with the friendship between the two firmly reinforced, even while James knows he still has a long way to go to fully restore both himself and the young Bob cat to happiness and good health.

It brings to my mind the creed about having a “seed of faith”  – with the coming of Bob the cat, a seed of faith in Jame’s own humanity and in normalcy for both Bob and himself, was sown.  This book is well worth reading for this insight alone.

I own all 3 books in the series.

I have read all 3 books and each continues the story and is well worth reading.  James goes more into his own personal history in the follow up books, including looking at mental health issues (i.e. specifically at lack of proper diagnoses and treatment for mental health issues).  He also talks about the growing publicity around Bob and himself, resulting in the first book being written.

“A Gift from Bob” published in 2014 shows how James is trying to cope with being in the lime-light, and reflects upon a very hard Christmas for Bob and himself in 2010.  This part of their lives is very gripping and touching — for the harrowing times that Bob and James faced, and for their triumph over adversity.  It teaches you to be grateful for small things.

I also have the kid’s picture book about Gobi, which I bought from Etsy together with a wonderful large Gobi toy!   You can read about that book  here .

Copyright notice:  this article may not be used as someone else’s work, or reproduced without credit to the author.

Bookaholic and Peace-aholic, and Animal lover, I try to spread peace and fairness for all, and appreciation of, and proper use of the wonderful world we live in. Mitakuye Oyasin - we are all related.